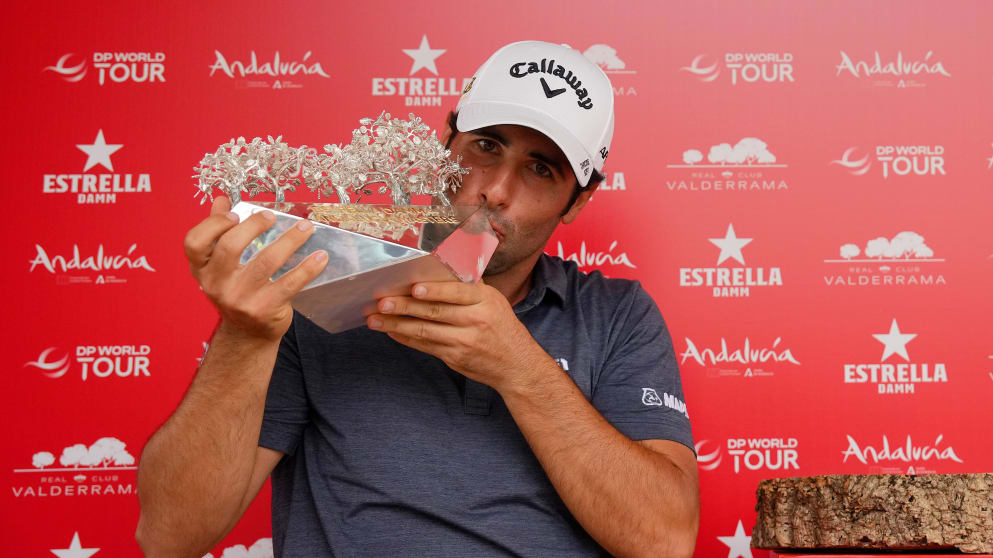 The Spaniard went into the final round with a six-stroke cushion and never gave the chasing pack an opportunity to catch him, firing four birdies and a single bogey in a closing 68 at Real Club Valderrama to finish on 19 under par, setting a new tournament record.

Joakim Lagergren finished alone in second after posting a final-round 68 to climb up the DP World Tour Rankings in Partnership with Rolex.

The Swede began the week 127th in the standings but moves into the top 50 following an impressive performance in Sotogrande.

Australia's Min Woo Lee was three shots further back in solo third, two ahead of local Angel Hidalgo, whose fourth-placed finish moved him to 88th on the DP World Tour Rankings in Partnership with Rolex.

Adrian Otaegui: Very proud. I feel so happy to have my first win in Spain in front of these crowds on my favourite golf course in Spain. It’s unbelievable. I’m happy with everything, the week was perfect.

The whole week the crowds were absolutely amazing, especially yesterday and today. The scenery was amazing with the narrow fairways, the cork trees and all the spectators, all the kids.

I would like to thank Valderrama for hosting us. I always feel like I’m at home when I’m here. I’m just so happy to have my first victory in Spain.

It’s my favourite golf course in Spain and probably in the world right now. I love playing here, it’s just a garden and it is very special for me to have my first victory in Spain in Valderrama.

The plan was to start strong, forget the shot difference I had and just try to beat the others. I started good, had a birdie chance on the first and on the second, had a par save on number three. Two very good putts on four and five gave me a little bit of momentum and just tried to keep pushing.

I played very well until the end. A couple of putts that didn’t drop on the back nine, but I tried to follow the plan and I think I did well.

The Estrella Damm N.A. Andalucía Masters, an event in the DP World Tour’s Race to Dubai made possible by the essential contribution of the Real Club Valderrama, is sponsored by Estrella Damm and the Consejería de Turismo, Cultura y Deporte of the Junta de Andalucía, jointly funded by the EU and was declared Event of Exceptional Public Interest by the Government of Spain.