He governs one of the largest municipalities on the Costa del Sol, and one of Spain’s golf tourism powerhouses. In fact, Mijas has the second highest number of golf courses of any municipality in Spain, only surpassed by neighboring Marbella. José Antonio “Josele” González, 37 years of age and general secretary of the local PSOE (Socialist Party), has never played golf but is aware of its impact on tourism in the area.

“The golf segment,” he says, “is very important for Mijas, especially in the battle against the much-feared seasonality of tourism in coastal municipalities, where sun and sea tourism remains a potent attraction for tourists from all over the world.”

"Paradoxically, golf begins its high season from autumn, making the Costa del Sol – with its large number of amenities – a popular destination whose appeal is obviously also enhanced by great weather 365 days of the year"

"Facing a harsh winter in European countries," adds the Mijas mayor, "destinations like ours become more palatable than ever for golfers, and that's when the Costa del Sol emerges as a popular option and every year becomes better positioned in the market.” 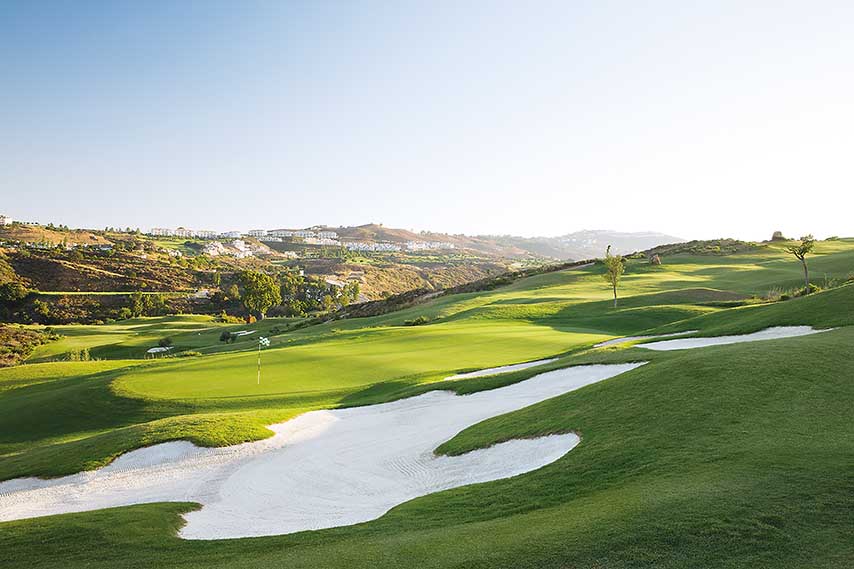 What initiatives are being undertaken by the town hall to consolidate and strengthen this important tourist destination?

This year we have highlighted this segment as one of our strong points when it comes to attracting tourists, and we are focusing on the creation of our own golf brand to distinguish us from other destinations, as well as devising a special golf marketing plan.

Have you made any calculations, albeit approximate, of what golf tourism represents in terms of employment and revenue for the municipality?

We currently don’t have any precise data for the municipality, but we do for Málaga province as a whole. What is clear is that golf translates into employment and wealth for the entire Costa del Sol. Its impact on the province is very important, an estimated annual average of €1,410 million in direct and indirect production, with golfers having an average stay of 12.3 days and average total expenditure of €1,800.

The average general expenditure by visitors in the golf tourism segment is double that of other seasonal tourists on the Costa del Sol, among other reasons, thanks to its extensive amenities including more than 70 golf courses, which represent an impressive resource.

Málaga province has everything on offer to be a flag-bearing destination in the world in terms of golf and hosting such events as the Spanish Women's Open. There is no question about the great relevance of tourism as an engine of economic growth. Tourism accounts for 13 per cent of the Andalucian GDP and the 500,000 golf tourists represent around five per cent, according to latest data from the Junta de Andalucía (regional government). We cannot ignore this data, and we must continue to consolidate the sector.

The variety of golf options is a major feature of the municipality, with courses suitable for all tastes and budgets...

That’s true. This is a question we are asked quite often, and I sincerely believe that this sport has been drawing closer to the general population. It still has a certain reputation for being an expensive and elitist sport, but I believe that those views are not in tune with the reality of current times. There are many other more expensive sports that certainly do not generate the same volume of business and tourism that golf does.

The good thing about having a wide range of golf courses is not only that a synergy is generated between them all to keep improving every day, but also to make this sport more accessible to all types of players, both foreign and Spanish – and it should be noted that their numbers been growing for several years.

Are there any projects for the construction of new golf courses in the municipality?

Yes, we have a future project in the area known as the Valle del Golf (Golf Valley), which has been officially declared of “Tourist Interest” at a regional level. It includes an 18-hole golf course, five-star hotel, and Andalucian-style village with 296 apartments on 100 hectares.

The project involves an estimated investment of €60 million euros, including construction of the five-star hotel with 154 rooms and the golf course, as well as a congress hall, spa and beauty salon, sports training and physiotherapy centre, and restaurant offering regional haute cuisine.

It also includes a single-building tourist complex with 54 apartments and a central square, restaurants and shops, and an Andalucian “pueblo” with 296 apartments and independent access.

So we are talking about the expansion of sports and leisure options associated with tourism in Mijas and on the Costa del Sol that will improve and consolidate Andalucía’s status in the golf tourism segment.

Apart from golf, what other specific attractions does Mijas have in the tourist segment that distinguish it from other holiday destinations?

The good thing about Mijas is that it has an exceptional wealth of assets and resources in just 149 square kilometres. Our municipality brings together the best of the sea and the mountains, we have gastronomy, culture, nature-based sports, sun and beach, history... endless attractions to enjoy throughout the year.

Our commitment is based on “tourism sensations” and, to that end, every day we are thinking about providing excellence and paying close attention to the tourism sector, which is the main engine powering the local economy.

We strongly defend the importance of growing as a municipality, of growing well, and doing so in a sustainable way so that residential, family and quality tourism remain the hallmarks of our holiday destination.

Has the town hall considered the possibility of Mijas putting itself  forward as the potential venue for the 2023 Solheim Cup?