There are not many competitions capable of influencing the evolution of a sport or even an entire country. Spain has been fortunate enough to host some of these events, such as the 1982 World Cup, the 1992 Olympic Games and the Ryder Cup held in 1997 at Real Club Valderrama, home of the Estrella Damm N.A. Andalucía Masters. From October 13-16, spectators will have the opportunity to enjoy this event of the DP World Tour, the Spanish event with the highest money purse, and walk the same holes played by golfers such as Tiger Woods, José María Olazábal, Fred Couples and Nick Faldo in that historic duel won by the European team captained by Seve Ballesteros.

That Ryder Cup, the first held in continental Europe, marked a turning point in the popularisation of golf in our country and served as a spectacular boost for the promotion of Spain, Andalucía and the Costa del Sol as a tourist and sport destination, benefits that are still being reaped 25 years later. Furthermore, that Ryder Cup, which came to Real Club Valderrama thanks to the efforts of Jaime Ortiz-Patiño and the support of a good number of institutional and private sponsors, is inextricably linked to the figure of the two number one players that Spanish golf has had throughout its history: Seve Ballesteros and Jon Rahm.

Seve Ballesteros, transformer of today’s DP World Tour, was at the helm of the European team (which included José María Olazábal and Nacho Garrido as players and Miguel Ángel Jiménez as vice-captain) and his meticulous approach was indispensable in leading the European team to the final victory over the United States. The 14 ½ -13 ½ win was clinched on the last hole of the final match of the final day when Colin Montgomerie conceded the final putt to Scott Hoch to earn a vital half point.

“For me it was a very special Ryder Cup: after all the Ryder Cups Seve and I had played together, it was the first time I played for him as captain. Seve was attentive to everything. He demanded a lot from us, the same as he had always demanded from himself and he was on top of all the players. Seve studied the American team’s game in depth and prepared the course so that we all played from the same areas to have the same opportunities, and with the help of ‘Pisha’, his right-hand man, he was absolutely right when choosing pairings. He conveyed to us the passion he put into everything he did and he was a great captain,” recalled José María Olazábal on the 20th anniversary of the 1997 Ryder Cup.

Although Jon Rahm was just a two years old kid when the Ryder Cup was played at Valderrama, his sporting future was also marked by that competition.

“Some friends of my father’s were at the 1997 Ryder Cup. When they came back, they encouraged him to play golf and we signed up for Eduardo Celles’ school. That’s how it all started; if it wasn’t for that Ryder Cup, I probably wouldn’t be here”, explained Rahm on his first appearance at the Estrella Damm N.A. Andalucía Masters. That trip by Jon Rahm’s parents’ friends was decisive in directing their children’s steps towards golf, something that also changed the history of this sport in our country.

For his part, Rahm has always pointed to Seve Ballesteros as a beacon and reference.

“I don’t take it as a pressure being seen as a catalyst for golf, for me it’s a motivation. I would love to be able to help golf, even if it’s a small part of what Seve did in his time. I play thanks to him and the 1997 Ryder Cup at Valderrama,” he explained at the 2018 Open de España.

The course designed by Robert Trent Jones Sr., the best in Spain according to the most prestigious specialised publications, has been hosting top level tournaments such as the Volvo Masters since 1988, but its reputation was definitively established in that glorious and unforgettable Ryder Cup. Twenty-five years later, spectators will be able to experience again a good deal of unique moments at the eighth edition of the Estrella Damm N.A. Andalucía Masters, which has a comprehensive ticketing offer with individual day tickets, and four-day and weekend passes, with preferential rates for federated golfers and free entry for children under 13.  Tickets can be purchased at  edamgolf.es, from the Tickets menu on the tournament website or at the DP World Tour website.

The Estrella Damm N.A. Andalucía Masters, an event in the DP World Tour’s Race to Dubai made possible by the essential contribution of the Real Club Valderrama, is sponsored by Estrella Damm and the Consejería de Turismo, Regeneración, Justicia y Administración Local of the Junta de Andalucía, jointly funded by the EU and it was declared an Event of Exceptional Public Interest by the Government of Spain.

Javier Reviriego, general manager of Royal Valderrama: “Working at the Ryder Cup in 1997 was a dream”

The goddess of fortune did not really help Javier Reviriego in his aspirations as a professional golfer, but she did lend him a hand when it came to carving out a brilliant – and well-deserved – future career in golf club management. The general manager of Royal Valderrama Club and previously Finca Cortesín – two of the most prestigious and award-winning clubs not only in Spain but in Europe, and both the venues for top international professional tournaments – experienced the 1997 Ryder Cup in a special way.

“I experienced it first-hand working there,” he recalls. “At that time I was the professional at Royal Sotogrande Golf Club and British Sky Sports needed golf professionals who spoke English. I was lucky in that they hired me to follow the games with a walkie-talkie, and what I basically did was tell the commentator the club they were going to play and the distance they had. I went with my little yardage book – back then there were no laser meters – and I told him what club they were going to play, the distance and obviously what shot it was.

“It was actually an incredible experience. I was able to go inside the ropes, I was able to follow Tiger for two games, Chema Olazábal… I followed the game in which Nacho Garrido hit his famous bunker shot on the 17th.”

Did it cross your mind at that time that one day you would end up being the general manager of Valderrama?

No. Since starting to manage clubs, I had always dreamed of making it to Valderrama, but at that time my dream was to play golf, it was to compete, until I realised that wasn’t going to be possible. It didn’t cross my mind then, not at the time, but working at the Ryder Cup was a wonderful experience.

What do you remember most about that Ryder Cup?

What I remember the most is Seve (Ballesteros), who was in a buggy that must have been souped up, because he was going super fast everywhere. Suddenly you would find him at any hole – he was constantly moving around the course. Several times I was sitting down and suddenly I looked to the side and there he was. I specifically remember a putt that Olazábal made on the 18th hole to tie a match – there are several photos and Seve is seen on television celebrating it – and I was there, right next to him and (vice-captain) Miguel Ángel Jiménez, experiencing it close up. 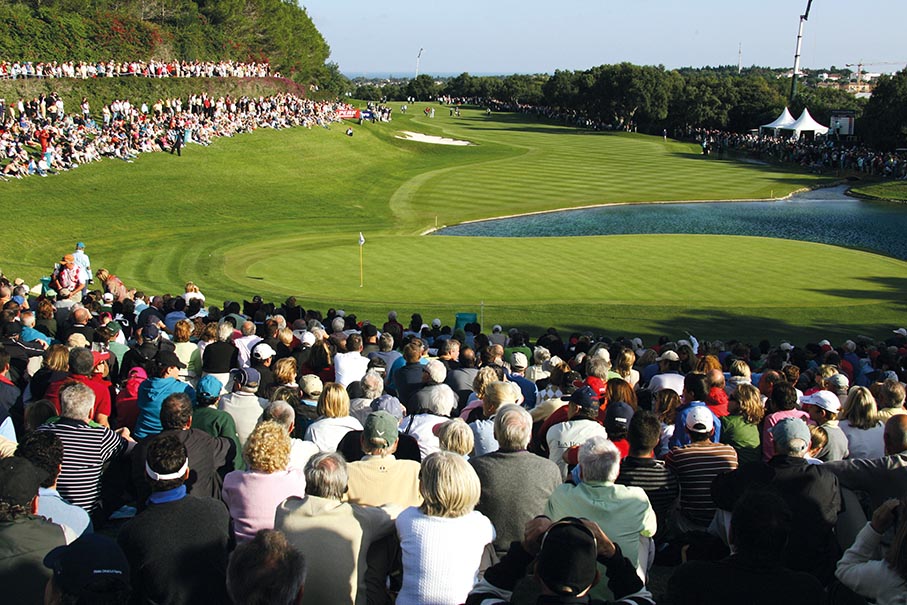 Do you think that 1997 Ryder Cup was particularly special or just one more on the calendar?

It was very special for many reasons. First, because it was the first time it had left the (British) Isles. Second, because it was held at a course that was already legendary at that time, having achieved high maintenance standards that existed in the United States then but not in Europe – that is where the myth of the “Augusta of Europe” began. And above all because the captain was Seve, a very special person, with loads of charisma. All of that contributed to making it an incredible Ryder Cup.

And then there are other determining factors. We must not overlook the fact that it was the first Ryder Cup for Tiger Woods, who was only 21 years old and had just won the US Masters by 12 strokes, and it was his introduction to the European public, although he did not have a good Ryder Cup.

The atmosphere was incredible. The British public is very knowledgeable about golf, but I think that the public at that Ryder Cup had more energy, more passion, and that was noticeable out on the course. I remember it being a spectacular atmosphere, much better than at other Ryder Cups I have been able to attend.

​​What did that Ryder Cup mean for the Costa del Sol?