The first event in May of the 11th Andalucía Golf Challenge-Destination PGA Riviera Maya Circuit was held at Santa Clara Golf Granada. Players were able to enjoy sunny weather, albeit with some strong windy conditions after midday, and the course was in excellent condition – with magnificent views of Sierra Nevada’s snow-capped peaks.

As for the special prizes, closest to the pin went to Miguel Ángel Maqueda Ortega, and the longest drives were won by Juan Manuel Pérez Jiménez (men) and Ana Ortiz Martínez (women).

(SEE PHOTO GALLERY AT THE END OF THIS REPORT)

The competition held at Santa Clara Golf Granada was the sixth of 25 scheduled tournaments that will make up the 11th edition of this open amateur circuit organised by Andalucía Golf/España Golf magazine. Between March and October, the circuit is being held in the Andalucian provinces of Málaga, Cádiz, Huelva, Almería, Sevilla and Granada, as well as in Madrid and Segovia, with most of the events taking place on the Costa del Sol.

The grand finale, which will decide the five winners of trips to the Mexican Caribbean, will be held at Marbella Club Golf Resort on 2 October, followed by a gala dinner at El Gamonal Restaurant in Marbella.

Access to the final will be secured directly by the winners of both categories and the scratch winner in each tournament, while the rest of the places will be awarded based on a ranking of points obtained in each event, comprising the best six results tallied throughout the circuit schedule (no minimum number of events has to be played).

The next events in May will be on the 16th at Zaudín, the 20th at La Herrería and the 29th at Valle Romano.

The grand final will decide the winners of five all-inclusive one-week trips to the Bahía Príncipe resort in Riviera Maya (Luxury Akumal Hotel), with golf rounds at PGA Riviera Maya, El Camaleón Mayakoba, Playa Paraíso and Gran Coyote. The top two players in each category and the scratch winner of the final – to be played at Marbella Club Golf Resort on 2 October– will travel to the Mexican Caribbean. 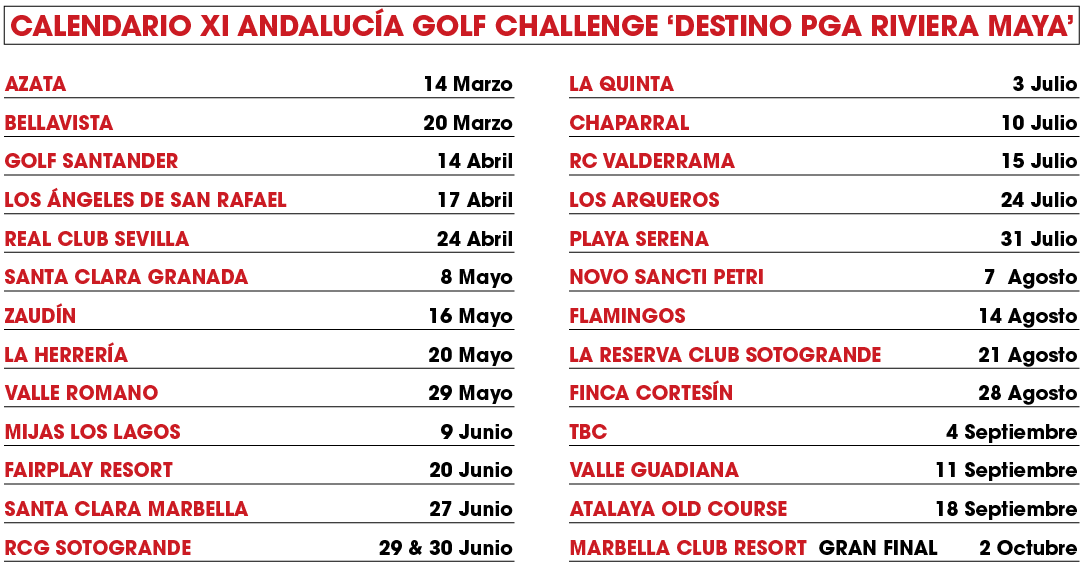