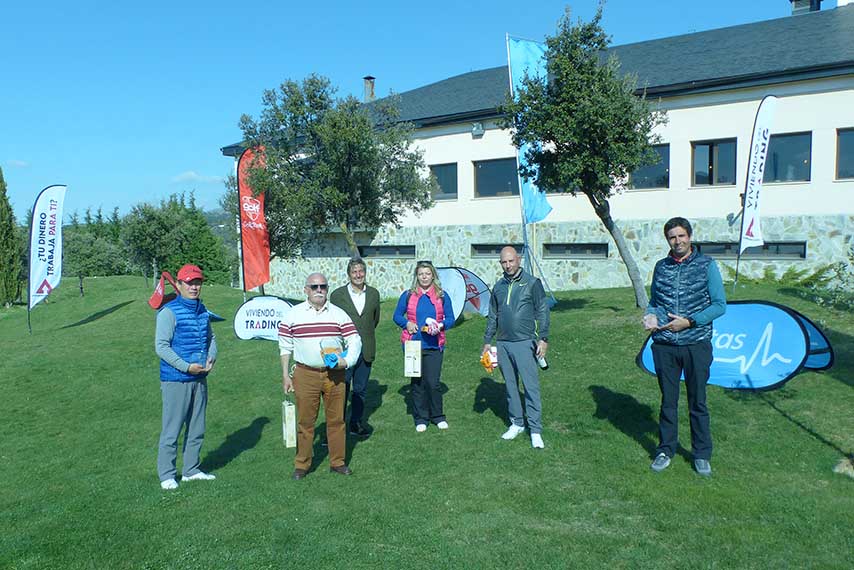 The first of these two tournaments, at Golf Santander (an exceptional and challenging layout that is well set up for hosting major championships), brought together players from all over Spain (Andalucía, Basque Country, Asturias, Castilla La Mancha, Madrid, Castilla y León, Valencia, etc.), who are permitted under the current COVID regulations to travel to compete in official golf competitions, and also to practise for them. The participants in this event at Golf Santander, a course managed by Asís de Bastida, enjoyed superb weather and a great golfing ambience.

As for the special prizes, closest to the pin was won by Evelio Alonso Fernández, and longest drive by Gonzalo de Torres Sainz (men) and Myriam Díaz Alegre (women). (SEE PHOTO GALLERY AT THE END OF THIS REPORT)

At Los Ángeles de San Rafael, the day  began with cold temperatures but sunny weather. Located in a stunning setting in the foothills of the Sierra de Guadarrama mountain range, and managed by Eduardo Tapia, the course features a technically precise design by Sterling & Marco that is undergoing renovations to make it more player-friendly and less difficult. One interesting feature of the layout is that, for players to cross the Moros River, which practically divides the course in two, Los Ángeles de San Rafael has the longest private bridge in Europe.

In addition to golf, another great attraction was an excellent meal in the clubhouse, including local farmhouse beans and suckling pig, two dishes that renowned Segovian chef Lali prepared masterfully – with many delighted participants enjoying seconds.

A Teledeporte broadcast team from the national Spanish Television channel travelled to the club to film a program on the 11th Andalucía Golf Challenge-Destination PGA Riviera Maya Bahía Príncipe Circuit, the tournament itself and Los Ángeles de San Rafael’s cuisine.

The special prize for longest drive (men) had dual winners, with a tie between Iván Luis Ramiro and José Sánchez Bárcena, Desislava Palauzova won the longest drive prize for women, and closest to the pin was Luis Navarro. (SEE PHOTO GALLERY AT THE END OF THIS REPORT)

The scratch winner and top three finishers in each category in both tournaments received trophies and prizes including presentation boxes of wine from Bodegas Laus and Enate (D.O. Somontano), and a dozen Bridgestone balls from Holiday Golf Group. Gifts raffles were also held at both tournaments – online at Golf Santander.

The two events in central Spain were the third and fourth of 25 scheduled tournaments that will make up the 11th edition of this open amateur circuit organised by Andalucía Golf/España Golf magazine. Between March and October, the circuit is being held in the Andalucian provinces of Málaga, Cádiz, Huelva, Almería, Sevilla and Granada, as well as in Madrid and Segovia, with most of the events taking place on the Costa del Sol.

The grand finale, which will decide the five winners of trips to the Mexican Caribbean, will be held at Marbella Club Golf Resort on 2 October, followed by a gala dinner at El Gamonal Restaurant in Marbella.

Access to the final will be secured directly by the scratch winner of each tournament, while the rest of the places will be awarded based on a ranking of points obtained in each event, comprising the best six results tallied throughout the circuit schedule (no minimum number of events has to be played).

The next event will be on 24 April at Royal Sevilla Golf.

The grand final will decide the winners of five all-inclusive one-week trips to the Bahía Príncipe resort in Riviera Maya (Luxury Akumal Hotel), with golf rounds at PGA Riviera Maya, El Camaleón Mayakoba, Playa Paraíso and Gran Coyote. The top two players in each category and the scratch winner of the final – to be played at Marbella Club Golf Resort on 2 October– will travel to the Mexican Caribbean. 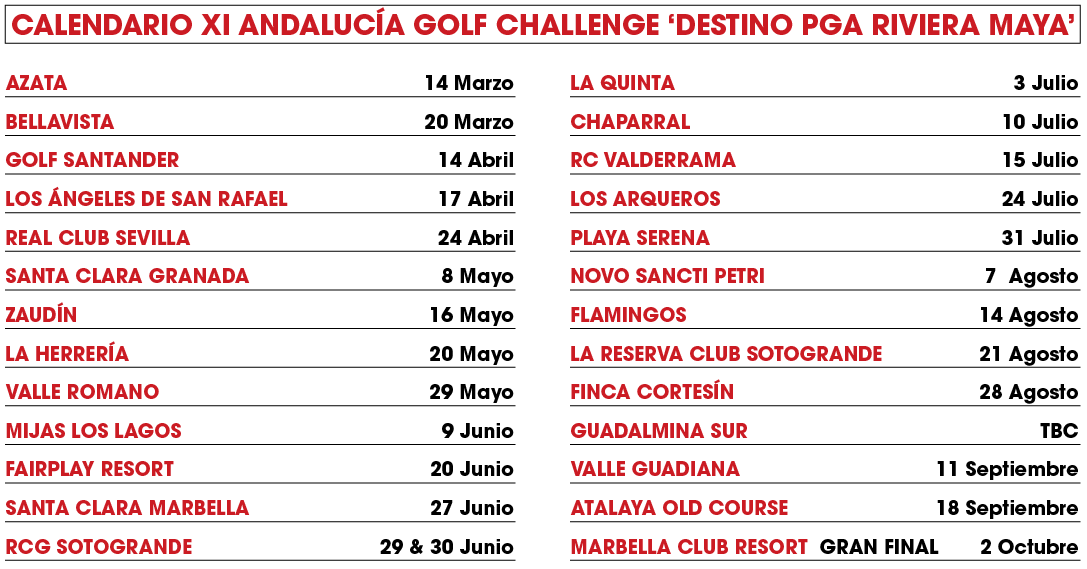